Ladies’ Jeans through the Ages

The history of womens jeans began in the 1850’s during the Californian Gold Rush. Levi Strauss, an immigrant and pedlar from Bavaria arrived in North America at the height of the Rush to hawk his wares. He was asked by miners to procure sturdy, durable work pants so he collaborated with a tailor and created the first pair of Levis from the canvas material he’d brought with him to make tents. 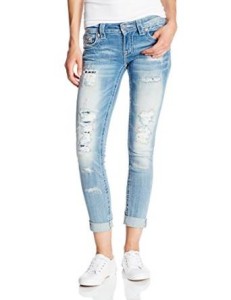 By the 1860’s Strauss had modified his design and technique and was producing heavyweight denim indigo dyed pants, which were named ‘blue jeans’. Over the years Levis became a household name and by mid 1915 an increasing number of women were wearing pants, with some even made out of denim.

By the 1950’s it was acceptable for women to wear pants, even though many considered them a sign of rebellion. High waisted styles were very popular until the Beatniks started the androgynous skinny jean trend that broke boundaries and created a fashion revolution.

By the 1960’s hippies and trendsetters had adopted jeans and the bell-bottom style was born. Denim became more versatile in the 60’s too and embellishments were added in the form of rhinestones, lace and even paint. As denim was such a hard-wearing fabric it was easy to customise and add a personal touch.

The Rise of the Designer Label

In the 1980’s Brooke Shields boldly declared that nothing came between her and her Calvins and women’s designer jeans entered a new era. Calvin Klein lead the pack, but even haute couture designers started creating ladies’ jeans in classic, elegant styles using the latest, more lightweight fabrics.

Technology has also had a huge influence over jeans and at sites like http://www.cuba-clothing.com/. you’ll find denim that’s got 4-way stretch and other hi-tech features that have developed over the years.

In the 90’s the androgynous style was back, this time with extremely baggy jeans paired with tiny crop tops. By the new millennium just about every style of jeans imaginable had been donned and fashion had done a full circle, with wide leg, high-waisted and skinny jeans making a return.

Denim is a fabric that’s interwoven in fashion the world over and although it’s undergone many transformations, it has stood the test of time, with Levis still being one of the most popular brands globally.