MIT creates the Camera Module, a technology that promises perfect HDR images in a shot

A group of researchers from the University of Singapore, MIT Lincoln Lab and Camera Culture group of the MIT Media Lab has developed a new technology that could mean a revolution in the imaging of high dynamic range. HDR pictures are perfect in situations where there is a high contrast between light or shadows for example, when we take a picture from inside a room landscape externally but so far the quality of them was poor by the system itself composition. 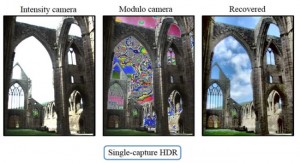 HDR images are often based on taking two or more consecutive photos with different exposures and then combine them to get a result that can display the appropriate information of both shots. With the call ** ** Camera Module MIT Media Lab is achieved make this process as a single dose, but also the door to the HDR video recording of a much more potent form opens.

The researchers explain how conventional cameras sensors are saturated by receiving too much light, but the Camera Module saturation solves that problem by resetting the sensor capacitors when that limit is reached and using an algorithm that calculates how much light these sensors collected . That allows to recover much more information and simplifies the process for photographers, who will not go to stumble when changing the aperture or exposure to these jacks.

These researchers believe that this technology can be also particularly interesting for robotic vision, and set the example of autonomous cars: if the vehicles are in a dimly lit tunnel and leave it on a clear day you will meet a strong change lighting that can make the vision inside and outside the tunnel does not behave optimally, something that for example this type of camera could help make HDR.