Dell Chromebook 13 – Chrome OS makes the leap to the company

The vast majority of Chromebooks that have been put on the market were characterized by one thing: they were cheap. These notebooks based on Chrome OS have been since their first editions teams led mainly educational settings, with modest settings and conceived almost as portable battle.

The thing completely changes with the new Dell Chromebook 13 teams arriving with configurations that can range from something more basic to something truly remarkable. Both Google and Dell now want them guide the company, a segment in which Chrome OS so far had not made much progress. 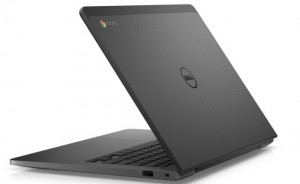 The design of these devices is similar to the Dell XPS 13, of which are borrowed some lines or components as the glass touchpad with this construction, touch and so remarkable performance. In the outer shell are finished in carbon fiber, while in the lower part the protagonist is the aluminum inside, around the keyboard and touchpad, we have a magnesium alloy.

The hardware configurations are based on a modest hardware set. So, we have an Intel Celeron processor at 1.5 GHz, 2 GB of RAM and 16 GB of storage, plus the 13.3-inch IPS 1080p on top of which we will have a 720p webcam. Connection ports include HDMI, USB 2.0, USB 3.0, a headphone jack and a microSD port.

In the top end configuration we find an Intel Core i5 processor, 8GB of RAM, 32 GB of storage and protected by Gorilla Glass touchscreen. There are two intermediate options with and without touch screen to complete the set. The integrated battery has a battery that the manufacturer estimates within 12 hours.

The software is the key to the company

Dell’s new Chromebooks are aimed especially at business users who base their work on web applications and therefore have a browser like Chrome and Chrome OS operating system as an ally interesting.

The integrated version of Chrome OS on these machines also has interesting improvements aimed at the professional user. One of the most important is the VPN support that reaches the operating system via the Dell SonicWALL Mobile Connect application and allows these users to make use of these virtual private networks to connect to business work environments.

Also important are the advances that have been made ​​in the virtualization software for Wyse Dell Appliance -vWorkspace in Chrome OS and allows users of these Chromebooks run Windows applications in parallel with the execution of Chrome OS. In addition to Dell they want to offer specialized services to such users allowing easily solve any problem support.